You are here: Home/ Blog / How to Secure Your Sensitive Documents

How to Secure Your Sensitive Documents

Finally, DRM that is easy enough to use without the burden of requiring readers to download, login, or have any special software.

My Wharton friend recently told me about the “deal of the century”. He was offered to buy Aspen Highlands Ski Resort – the ski operations, National Forest ski terrain rights, and the base lodge land development property for $4 million…in 1992.

Inflation is not transient. $4 million probably seemed like a lot back then, but he could not put the funds together for the purchase (and forever regrets not getting it done). Why was it such a great deal? Back in 1992, commercial internet did not really exist. There was no way to easily share deal terms at the speed of light with all who might be potentially interested. For those concerned about sharing deal terms without non-disclosure agreements (NDAs) — having sensitive financial details shared inadvertently with the masses — it was a much simpler time.

Today, every seller of private deals or investments must deal with a dilemma: If I get the deal in the hands of the investment bankers, they can circulate it to whomever even hints of an interest. Even if there is an NDA available, easily eSigned, they often don’t take the time to deal with the formality. After all, they are looking to sell the deal; why build in hurdles?

To make things easier, many would-be dealmakers proceed with a false sense of security, as these deals have gravitated towards creating “deal rooms,” which for most, essentially are online web storage folders a bit fancier than Box.com or Dropbox that have all the detailed financing documents stored, accessible for eager investors.

These “rooms” may contain a process to eSign an NDA to enter and track who signed, but once entered, people will often download the documents so that they can read them wherever they are. Readers (i.e., potential investors) often want to ask someone, “what do you think about the deal?” This inevitably sets up a casual forward of sensitive deal terms by email outside of the deal room.

Below is an example. All the financial details were in PDFs that I received from a friend who was asking me what I thought about a deal to buy a small ski area. I flipped through the document, certainly a picture-filled beautiful brochure marketing the deal, but it also contained all the detailed financials and deal terms. And, at the bottom, there was a link to the “data room” which simply contained an NDA to eSign inside of the Dropbox platform. 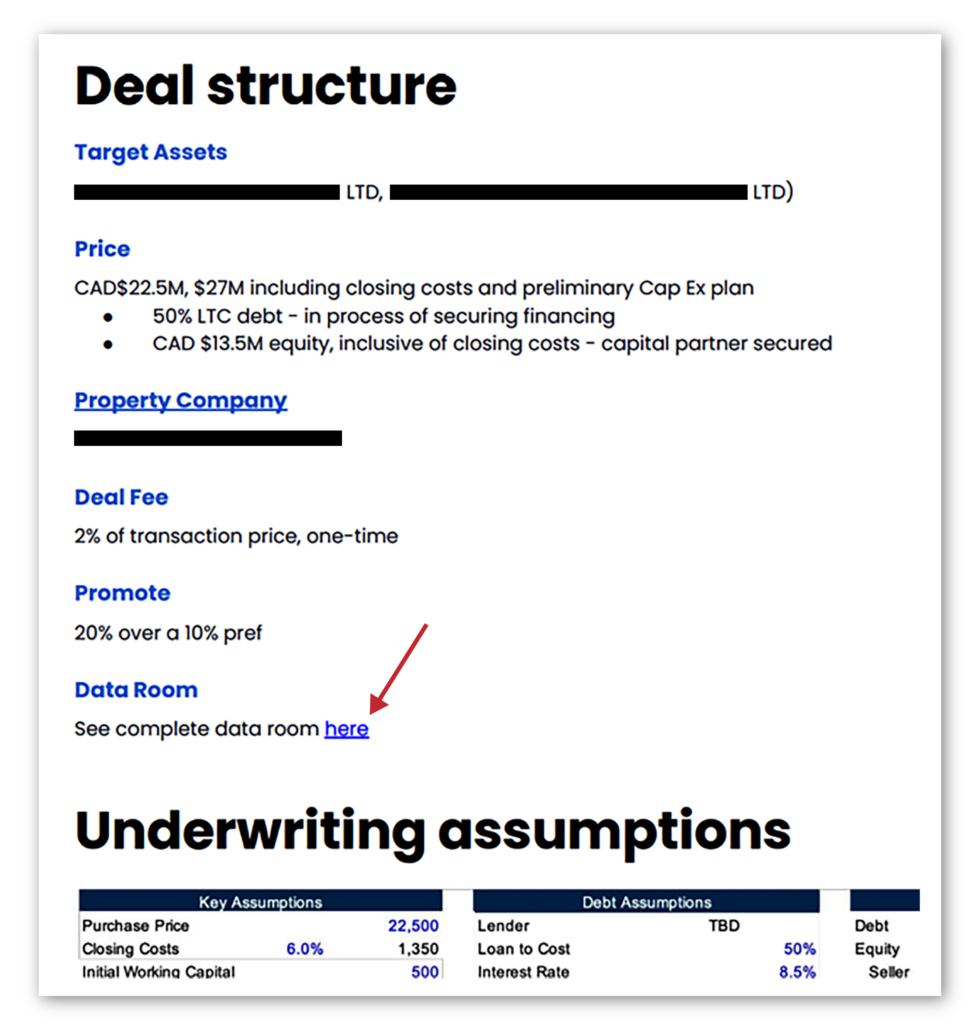 The deal terms are now shared and circulated with the Data Room NDA optional? Clicking data room to get the NDA to eSign (strangely, this link was buried deep in the financing book after all of the deal terms), it even recorded me as someone else – presumably the link was tagged/cookied with the first person who received the tracked document.

Double whaa? Is this really secure? No. Does this process protect private financial information? Certainly not.

Enter RDocs as an alternative — essentially as a decentralized “deal room” or “data room” — that builds the security into the document itself but opens (for those authorized) just like any PDF in your browser. If these deal marketers were more tech savvy, they could have converted the deal terms into RDocs rights-protected documents and even set different security levels for the marketing pages versus the financial terms!

The marketing brochure for the deal could be set to capture the email address of each document viewer but would not restrict viewing. The financial terms could also be set to restrict viewing to only pre-authorized people or from within pre-authorized domains, locations, etc. Plus, it could also track who is viewing what information when, essentially auto-building a lead list of those interested or quasi-interested in the deal!

RDocs (check out the new product site) is designed to work in the way people work — sending deal terms and docs as attachments to email. Finally, we have an EDRM that is easy enough for real people to use without the burden of requiring readers to download, login, or have any special software.

RDocs empowers you to protect, control, track, or kill access to documents in-the-ether, even after sending; even after recipients have tucked the files away on their personal drives; and it is the only EDRM platform built on 20 years of leadership in email security and compliance. RDocs is elegantly easy and more affordable. Plus, as always, we are friendlier to work with.

Please contact us to learn more about RDocs. Who knows? Maybe this will be the start of your new career as a ski resort mogul (no pun intended).

Digital Signature Vs Electronic Signature: What is the Difference?

Use RMail to Have Irrefutable Proof of Email Delivery

Affordable eSign and E-Security across the Industries

Tech Tips to Help You Do More, With Security in Mind, While You Work From Home

» How to Unsend or Kill an Email Sent by Mistake?
« Secure your Business Email with 25% Off on any New RMail Business License